During the dry season (summer), the majority of Los Angeles River in-stream flow originates as discharges from water treatment facilities run by Los Angeles, Glendale, and Burbank. Recently, all three cities have petitioned or plan to petition the State Water Board Division of Water Rights to increase local recycled water use. Increasing local recycled water use, however, will reduce the amount of water flowing in the river channel. Such reductions in flow will impact existing uses of the Los Angeles River, including recreation and aquatic life.

Southern California Coastal Water Research project (SCCWRP) was commissioned by the State Water Board to produce the LA River Environmental Flows study, which is expected to be used by the Water Boards to establish minimum base flow requirements in the Los Angeles River for upstream dischargers to maintain. SCCWRP conducted a series of studies to understand current beneficial uses of the river that are supported by its current flows. This included both recreational uses, as well as plant and wildlife species. SCCWRP then created models to understand how any reduction of water levels would impact those beneficial uses.

During this process, the Conservancies (SMMC, RMC, MRCA, and WCA) commissioned a Supplemental Analysis, which intended to fill gaps in the Flows Study that were identified by SCCWRP and stakeholders, as well as address additional factors that should be considered in future decisions regarding minimum base flows in the LA River.

The data and analysis produced by the Supplemental Analysis give us additional clarity regarding the current ecosystem functions provided by Los Angeles River flows that occur in the midst of our urban landscapes. 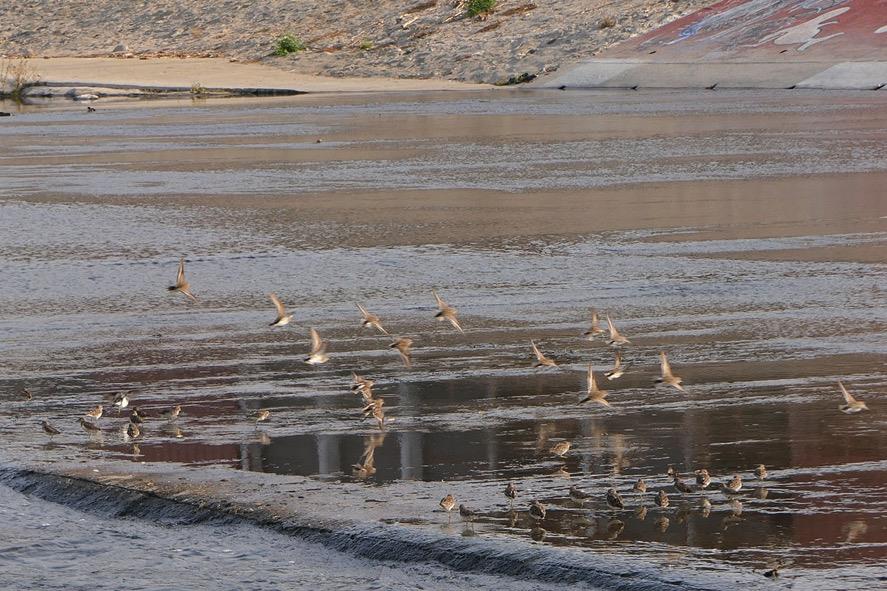 A review of the Flows Study by Stillwater Sciences calls out additional factors that need to be taken into account when determining minimum allowable base flows in the Los Angeles River channel including:

Read the full text of this review here.

Water temperature is a critical factor in the suitability of aquatic habitat for native fish species, including steelhead trout and Santa Ana sucker. Some of the particularly interesting findings of Southern California Coastal Water Research Project’s Assessment of Aquatic Life Use Needs for the Los Angeles River include that the river currently has flows that are at least partially suitable for coldwater fish such as the Santa Ana Sucker. This suggests that if temperature and substrate condition were to be improved, flows would be appropriate for these species. However, both flow and habitat/substrate modification would be necessary to support migration of steelhead. Although current temperatures are generally too high to support these species, it has been suggested that more data on current conditions can inform restoration planning.

Heal the Bay’s Lower LA River Stream Team, made up of CSU Long Beach and Long Beach Community College students, collected dry season water quality, in-channel user, and temperature data in the Lower LA River, and helped to compile the results into Heal the Bay’s Annual River Report Card. The River Report Card has issued water quality grades for freshwater recreation sites throughout LA County since 2017, but this is the first time the Lower Los Angeles River is represented in the Report Card. From this data, we see:

What kind of life currently thrives in the channel of the Los Angeles River?

Myth: The Lower Los Angeles River has no ecosystem because it’s only a concrete flood control channel.

Truth: The Lower Los Angeles River is home to ecosystems that are unique to Los Angeles, our neighborhoods, and the particular way in which we manage water.

The Los Angeles River was designed for only one purpose: to convey floodwaters efficiently to sea.  Yet much of the 20 miles of channel from south of Downtown to the estuary has become habitat for thousands of wading shorebirds, who in the far past (before channelization of our rivers) used to enjoy extensive wetlands along the southern California coast. During spring and summer, a thin film of green algae forms on the concrete floor of the flood control channel. The algae provides habitat for bottom-dwelling creatures, including the aquatic larval stages of insects. These in turn provide foraging habitat not only for wading shorebirds, but also for waterfowl, gulls and terns, herons and egrets, and swallows. The Lower Los Angeles River channel provides more than one square mile of habitat for wading shorebirds! Because any waterbird habitat in this region is so rare, this habitat is especially important.

Cooper Ecological Monitoring has completed what may be the first detailed vegetation mapping of current vegetation communities in both the Upper and Lower Los Angeles River channels. The report documents a dynamic and changing ‘novel’ ecosystem in the river channel—an ecosystem that has no parallels in natural, historically present ecosystems. The survey shed light on the specific nature of urban habitat provided by existing low flows, and maps and describes freshwater marsh, riparian, and warm water habitats, wading shorebird habitat, and areas within or in close proximity to the river channel that may hold relict habitat from before channelization of the river.

The team recorded 243 identifiable plant taxa within the channel of the Los Angeles River, of which at least 98 (about 40%) are considered native to California. 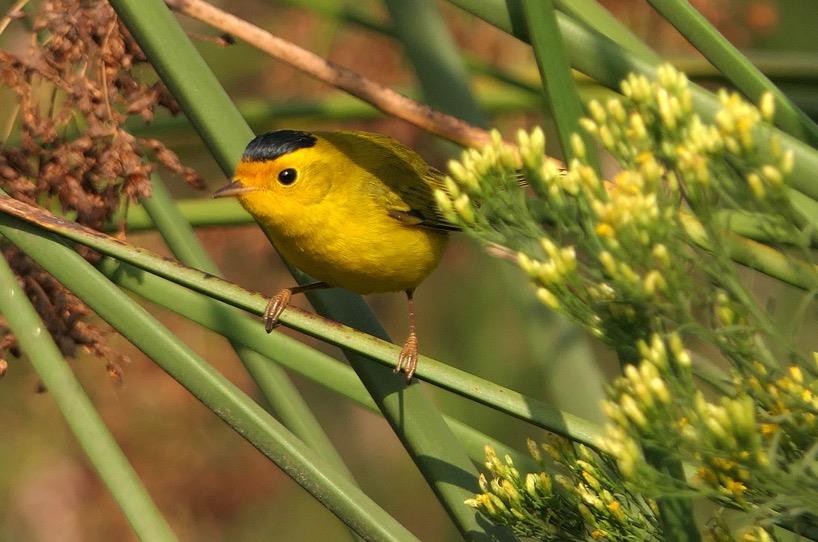 Thousands of migrant songbirds pour through the Los Angeles Basin each year in migration, with many utilizing the vegetation of the Los Angeles River channel. This Wilson’s Warbler (Cardellina pusilla) was observed foraging along Compton Creek. (photo: Robert A. Hamilton) 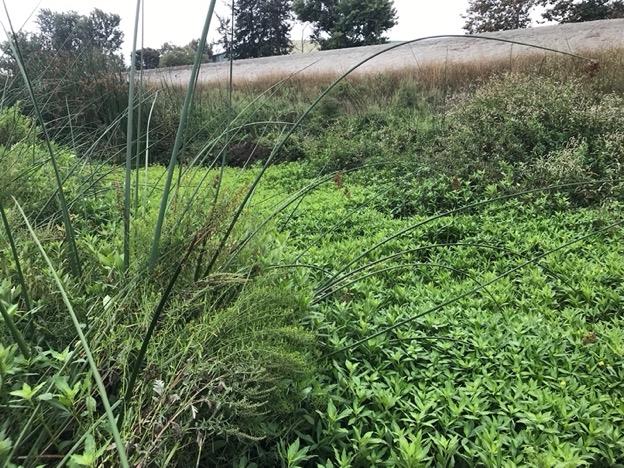 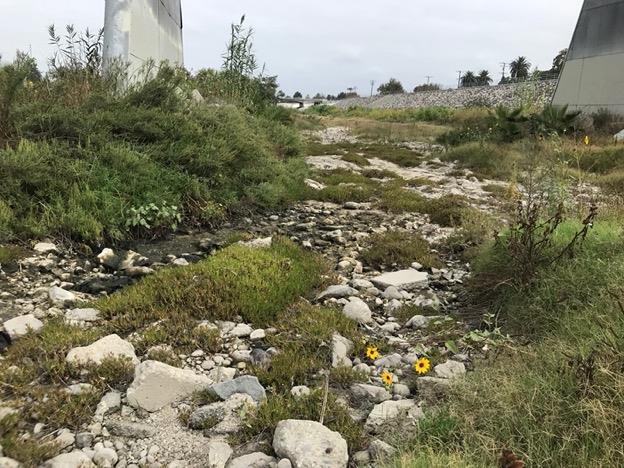 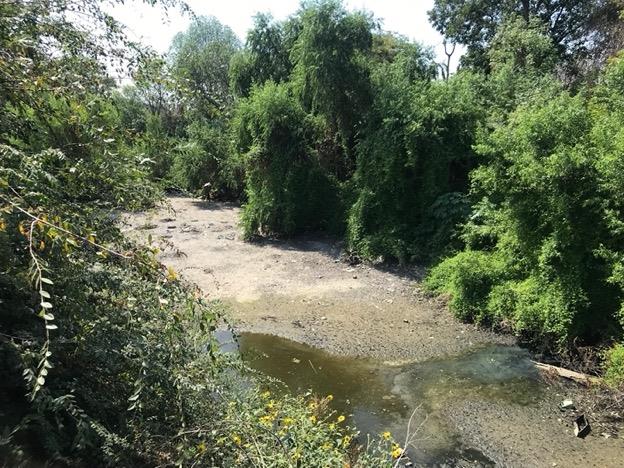 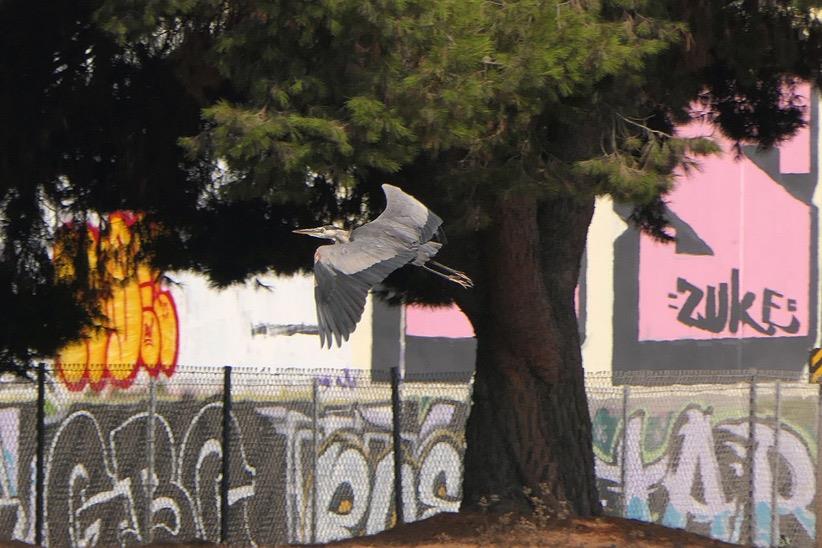